Where They are Most Often Found

Spotted Fever Rickettsiosis is found throughout the U.S. 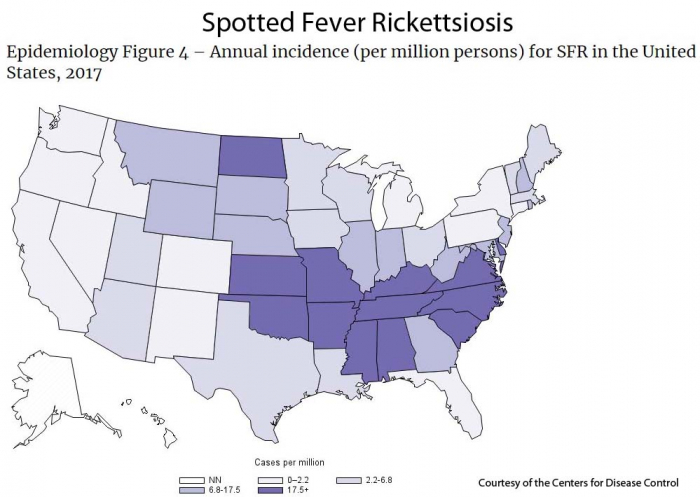 CDC Morbidity and Mortality Weekly Reports Diagnosis and Management of Tickborne Rickettsial Diseases: Rocky Mountain Spotted Fever and Other Spotted Fever Group Rickettsioses, Ehrlichioses, and Anaplasmosis — United States May 13, 2016 Tickborne rickettsial diseases continue to cause severe illness and death in otherwise healthy adults and children, despite the availability of low-cost, effective antibacterial therapy. Recognition early in the clinical course is critical because this is the period when antibacterial therapy is most effective. Early signs and symptoms of these illnesses are nonspecific or mimic other illnesses, which can make diagnosis challenging. Previously undescribed tickborne rickettsial diseases continue to be recognized, and since 2004, three additional agents have been described as causes of human disease in the United States: Rickettsia parkeri, Ehrlichia muris-like agent, and Rickettsia species 364D. https://www.cdc.gov/mmwr/volumes/65/rr/rr6502a1.htm?s_cid=rr6502a1_w

Blanton L. S. Infectious Disease Clinics of North America The Rickettsioses: A Practical Update. March, 2019 Rickettsia are small, obligately intracellular, gram-negative bacilli. They … cause illness throughout the world. Rickettsioses present as an acute undifferentiated febrile illness and are often accompanied by headache, myalgias, and malaise. Cutaneous manifestations include rash and eschar, which both occur at varying incidence depending on the infecting species…. Reactive antibodies are seldom present during early illness, so testing should be performed on both acute-phase and convalescent-phase sera. Doxycycline is the treatment of choice. https://www.sciencedirect.com/science/article/abs/pii/S0891552018300977?via%3Dihub

Rocky Mountain Spotted Fever After her 2-year-old son became ill because of Rocky Mountain spotted fever following a tick bite, his mother is sharing their story to raise awareness of tick-borne illnesses. "The only thing I had ever heard of was Lyme disease," the 24-old from Louisville, Kentucky, told TODAY. When her son first had a slight fever she thought it was an ear infection. But when he became lethargic and developed a rash, she realized that he was much sicker than she had thought. While his fever increased slightly, the family didn’t worry about the toddler until a rash appeared. "When we woke up the next day he had this light pink rash all over his body," she said. Jackson had the rare, sometimes fatal Rocky Mountain spotted fever. His health declined rapidly.

He had a fever of 105. The rash looked like bruises the size of pinheads. His face, his neck, his hands, the bottom of his feet were covered in dark red dots. He slept for 22 hours and refused to eat.  His mother took him to the emergency room and explained he had been bitten by a tick more than a week ago and his health steadily declined. Immediately, the doctors believed he had a mild version of rickettsiosis or the more serious Rocky Mountain spotted fever, which is considered by the CDC to be one of the most deadly tick-borne illnesses. As doctors waited for the results, they treated him with IV antibiotics….  [He is making a recovery but there may be neurological issues.]

[From ProMED, edited]When a female Dermacentor tick harboring the organism attaches to a passing human, she usually starts low on the body after transferring from grassy vegetation or even directly or indirectly from a dog. After crawling around on clothes seeking an appropriate site (wearing white clothes makes a wandering tick easier to spot), she attaches and begins to feed.

…It generally takes 24 hours to activate and transmit the rickettsial organism. For this reason, daily or twice-daily tick checks with removal will minimize disease transmission. Ticks that attach in hairy areas such as the scalp or beard may be more difficult to find.

The presenting illness is generally nonspecific, fever, muscle pains, and headache (which is usually described as quite severe). The rash begins on Day 3 of the illness, initially maculopapular at the wrists and ankles before becoming petechial and purpuric, involving the palms and soles as well as spreading proximally to the trunk. Purpura usually is not seen before the sixth day of illness. The mortality is indeed quite low if treatment (usually a tetracycline) is begun during the first 2 days of the rash or before.  Empiric treatment for this infection should always be begun in people with compatible symptoms inhabiting endemic areas during the spring and summer, even if no tick bite is known. The early rash of this disease can be seen here.

Delayed diagnosis contributes to morbidity and mortality of RMSF …. A tetracycline represents the best drug for treatment, even in children. …Although RMSF is uncommon, tetracycline is also used for borreliosis, anaplasmosis and ehrlichiosis and is often begun empirically before diagnostics are available. https://www.today.com/health/rocky-mountain-spotted-fever-tick-bite-lands-2-year-old-t155846

Bradshaw, M. J. et al. Clinical Infectious Diseases Meningoencephalitis due to spotted fever rickettsioses, including Rocky Mountain spotted fever Aug 15, 2019 The spotted fever rickettsioses (SFR), including Rocky Mountain spotted fever, are tick-borne infections with frequent neurologic involvement. High morbidity and mortality make early recognition and empiric treatment critical. Rash was significantly more common in children than adults (100% vs 50%) but other clinical features were similar between the two group…. Ninety percent of patients required ICU admission …. Outcomes were similar between adults and children with nearly half failing to make a complete recovery by the time of discharge.  SFR meningoencephalitis is a life-threatening infection. The clinical presentation varies between adults and children based on the presence of rash and brain MRI findings. https://academic.oup.com/cid/advance-article/doi/10.1093/cid/ciz776/5550194?guestAccessKey=8f2bcb54-9b15-4fc1-903e-cfd7dabcf9c4