Powassan is rare but kills 10% of those who get it and leaves half of its victims with lasting neurological problems. It's viral and related to West Nile Virus.

Powassan is carried by deer ticks and found where Lyme disease occurs. 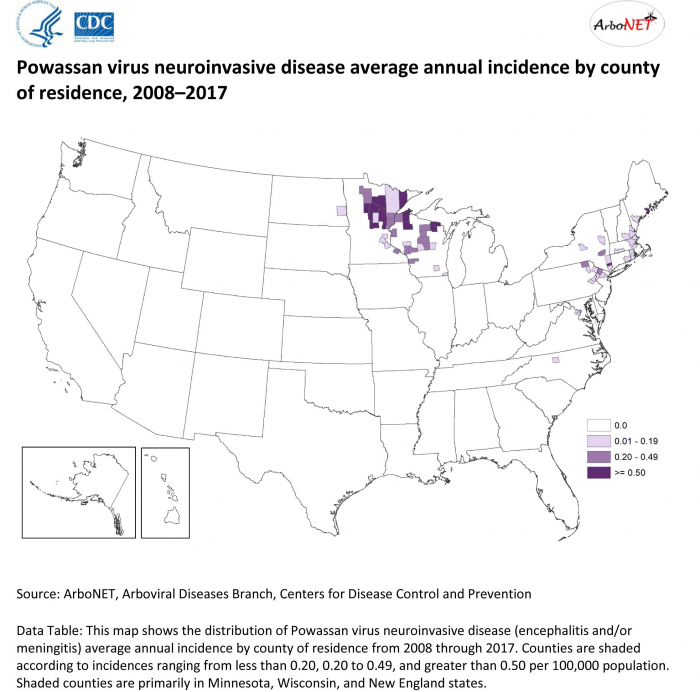 Bogaty, C. Canadian Medical Association Journal Powassan virus - an emerging public health concern Apr 16, 2018 POWV is emerging as an important pathogen … [It] is transmitted by the blacklegged tick  Ticks harboring POWV have been detected in Nova Scotia, Ontario and Manitoba, with expansion of the tick across eastern and central Canada  http://www.cmaj.ca/content/190/15/E472.long

Corrinet, T. et al. Zoonosis and Public Health Powassan virus, a scoping review of the global evidence Jun 17, 2019 Powassan virus (POWV…causes sporadic but severe cases of encephalitis. 178 articles are included. The majority of the studies were conducted in North America (88.2%) between 1958 and 2017.  To date, POWV has been reported in 147 humans in North America. The virus has also been isolated from five tick species, and several animals have tested positive for exposure to the virus. https://onlinelibrary.wiley.com/doi/full/10.1111/zph.12485

NJ1015.com NJ Newton NJ Man Dies With Rare Scary Tick Disease; Another Seriously Ill June 8, 2019 The potentially deadly Powassan tick-borne virus has been confirmed in two Sussex County residents, one of whom died last month…. The Powassan virus is spread by the deer tick. The illness is rarer than Lyme disease, which is also spread by the tick, but 10% of people who contract the illness die from it. https://nj1015.com/nj-man-dies-with-rare-scary-tick-disease-another-seriously-ill/