Where They are Most Often Found

Lyme disease is found in 13 northeastern and northern Midwest states from Maine to Minnesota, and south to Virginia. 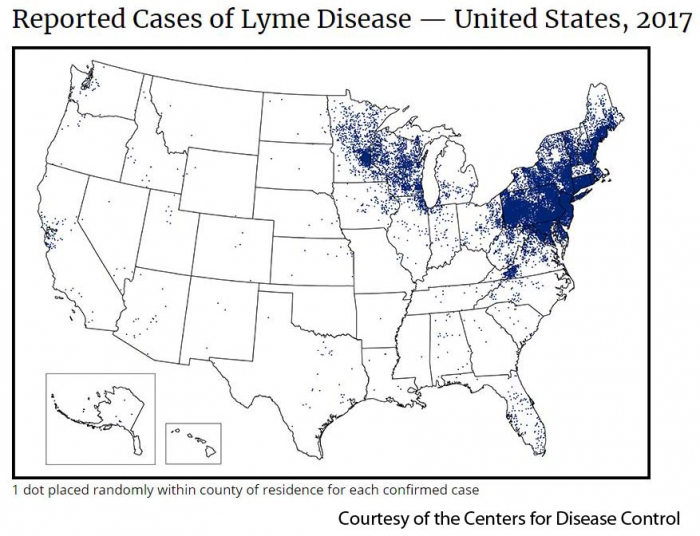 Bush, L. M. et al. Disease a Month Tick borne illness—Lyme disease   May, 2018 Lyme disease is the most commonly reported tick-borne illness in the US. The causative pathogen is a bacterial spirochete, Borrelia burgdorferi transmitted by four species of Ixodes tick species. Over 90% of US cases occur in northeastern states from Maine to Virginia, and in Wisconsin, Minnesota, and Michigan. Infection also takes place in northern California and Oregon. Lyme borreliosis is also diagnosed in parts of Europe, China, and Japan.

The white-footed mouse is the primary animal reservoir for B. burgdorferi in the U.S. and the preferred host for nymphal and larval forms of the deer tick. Deer are hosts for the adult ticks but are not infected with the spirochete.

Signs and symptoms of infection occur in 3 stages: early localized, typiﬁed by erythema migrans [a bull’s eye rash], …with a ﬂulike syndrome, neurologic, and cardiac manifestations and arthritis.

Diagnosis relies upon clinical evaluation and is supported by serologic testing. Treatment varies with stage of disease, but normally includes doxycycline, amoxicillin, and ceftriaxone. Currently, no preventative vaccine is available. In some geographic areas, patients may be coinfected with Babesia, Ehrlichia, and Anaplasma since the same Ixodes ticks transmit these pathogens. https://www.sciencedirect.com/science/article/abs/pii/S0011502918300075?via%3Dihub

Paules, C. I. et al. The New England Journal of Medicine Tickborne Diseases — Confronting a Growing Threat July 25, 2018 The public health burden of tickborne pathogens is considerably underestimated. …The CDC reports approximately 30,000 cases of Lyme disease per year but estimates that the true incidence is 10 times that number….  For less common tickborne pathogens such as Powassan virus, serologic testing can be performed only in specialized laboratories, and currently available tests fail to identify novel tickborne organisms….   …Clinicians should advise patients to use insect repellent and wear long pants when walking in the woods or tending their gardens — and check themselves for ticks when they are done. https://www.nejm.org/doi/full/10.1056/NEJMp1807870

The New York Times The Challenge of Diagnosing Lyme Disease July 29, 2019 …There is no way to test, unequivocally, for the presence of the bacteria that cause the disease. . Lyme disease is on the rise. The 30,000 cases reported annually …  represent only a fraction of the cases diagnosed and treated around the country. About half the cases occur in people under the age of 21, and boys from 5 to 9 years old are the most commonly affected group.

CDC Emerging Infectious Diseases Relative Risk for Ehrlichiosis and Lyme Disease in an Area Where Vectors for Both Are Sympatric, New Jersey, USA June, 2017 Lyme disease is the most frequently reported vector- borne illness in the Northeast. The much more aggressive Lone star tick, Amblyomma americanum, transmits the agent of human monocytic ehrlichiosis and may serve as the vector for several other emerging tickborne pathogens.

The lower-than-expected number of reported ehrlichiosis cases is attributed to a lack of awareness about ehrlichial disease by the public and by physicians, leading to misdiagnosis and underreporting.  Unrecognized infections (mild or asymptomatic), may have consequences for public health. Blood donors could pass the infection to immunocompromised patients. Sulfa drugs for unrelated ailments could cause worsened disease presentation. https://wwwnc.cdc.gov/eid/article/23/6/16-0528_article

Falco, R. C. et al. Clinical Infectious Diseases Assessment of Duration of Tick Feeding… Reduces Need for Antibiotic Prophylaxis After Ixodes scapularis Tick Bites Aug 1, 2018 Doxycycline is recommended for persons with Ixodes scapularis tick bites in certain geographic areas, if the tick had fed for at least 36 hours. …Over 40% of I. scapularis tick bites from patients seen at the Lyme Disease Diagnostic Center did not warrant antibiotic prophylaxis. https://academic.oup.com/cid/article-abstract/67/4/614/4944894?redirectedFrom=fulltext

CDC Emerging Infectious Diseases Increasing Prevalence of Borrelia burgdorferi sensu stricto–Infected Blacklegged Ticks in Tennessee Valley Volume 24, Number 9—September 2018 Borrelia-infected I. scapularis populations emerging in southwestern Virginia include immigrant ticks from the North, with some nymphs in these populations exhibiting host-seeking behaviors that lead to contact with humans. A similar invasion process might be underway in eastern Tennessee…. https://wwwnc.cdc.gov/eid/article/24/9/18-0343_article

Parola, P. et al. Travel Medicine and Infectious Disease Travel and tick-borne diseases: Lyme disease and beyond. Nov/Dec. 2019 Ticks transmit a greater diversity of viral, bacterial and protozoan infections than any other arthropod on earth, and in many temperate regions of the world, including Europe and the United States, tick-borne diseases (TBD) are the most widespread and medically important of all vector-borne infections.

Lyme borreliosis… afflicts tens and possibly hundreds of thousands of persons in the Northern Hemisphere each year. The scope and magnitude of other TBD have expanded worldwide. In the U.S. and Europe, 14 newly-recognized TBD have been identified in … the last 25 years …Travel-related cases of tick-borne encephalitis are probably under-estimated since there is little awareness of this disease in countries where the pathogen is not endemic …. Tick-borne rickettsial diseases are among the best examples of emerging infections, described in travelers …. Other tick-borne rickettsioses …include Mediterranean spotted fever, Rocky Mountain spotted fever Rickettsia massiliae, Rickettsia sibirica mongolitimonae, and Rickettsia slovaca. Since some of these diseases may have a fatal outcome, a prompt treatment with doxycycline should be started as soon as the disease is suspected clinically. https://hal.archives-ouvertes.fr/hal-01970230/document