Ehrlichiosis is the most frequently diagnosed tick-borne disease in the southern United States. Infections are reported most commonly during the summer months (May-September), which is the time of the year when adult and nymphal Lone Star ticks are most likely to bite humans. Seasonality of tick activity in southern states may be extended because of the warmer climate. No vaccine is available to protect people against Ehrlichiosis, so personal protection including use of repellent on exposed skin and insecticide such as permethrin on clothing, is important. Treatments are available. If untreated, Ehrlichiosis can be potentially life-threatening. Prompt treatment is important.

Ehrlichia chaffeensis is a bacteria that is the primary cause of ehrlichiosis in humans. It is transmitted to people through the bite of an infected Lone Star tick. The Lone Star tick is known to be an aggressive human biter. Its geographic range is expanding. 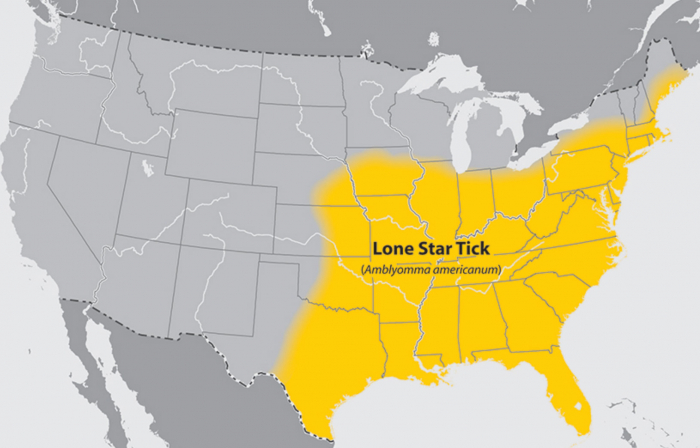 Signs and symptoms of Ehrlichiosis are often flu-like and typically begin within 1-2 weeks after a bite by an infected tick. Tick bites are usually painless, so many people do not remember having been bitten. More than half of those who get ehrlichiosis require hospitalization and 11% develop life-threatening complications. Delay in seeking treatment is a significant factor in developing severe disease symptoms.

Early signs and symptoms (the first 5 days of illness) are usually mild or moderate and may include:

Signs and symptoms of severe (late stage) illness can include:

Who is most at risk

Individuals (especially men) between 60 to 69 years of age account for the highest number of cases. Most of the reported cases have occurred in those who work outside or spend leisure time outdoors where Lone Star ticks are found.

Where has Ehrlichiosis has been found

Ehrlichiosis is most frequently reported in the southeastern and south-central United States. There were 1789 cases in the U.S. in 2019. Six states (Arkansas, Missouri, New Jersey, New York, North Carolina and Tennessee) accounted for more than half of the cases. Ehrlichiosis is believed to be under-reported. 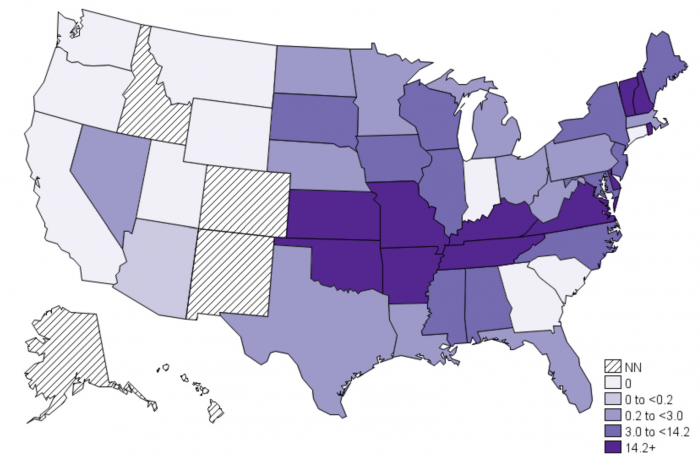 2018 Ehrlichiosis Incidence (per million people).
Image courtesy of the Center for Disease Control.

Other types of Ehrlichiosis are rare

Another type of ehrlichiosis is caused by a different bacteria (Ehrlichia ewingii) that is also carried by Lone Star ticks. It is less commonly reported and most infections have occurred among immunocompromised patients. Cases have been reported in Missouri, Oklahoma, Arkansas, New Jersey, Indiana, New York and Tennessee. It accounts for 10% of cases of ehrlichiosis. Like the more common bacteria that causes ehrlichiosis, it occurs in southeastern U.S. extending to the Great Plains. A third of all cases have occurred in just 3 states: Missouri, Oklahoma and Arkansas.

A third type of ehrlichiosis is carried by the blacklegged tick. This bacteria (Ehrlichia. muris eauclairensis) has only been seen in ticks in Wisconsin and Minnesota, where human cases have been reported