Babesiosis is the second most commonly-diagnosed tick-borne disease after Lyme disease.  It is a malaria-like illness caused by parasites transmitted to humans through the bite of an infected blacklegged tick, also known as the deer tick. The parasites attack the victim’s red blood cells.  Babesiosis may also occur through blood transfusion (it’s the most commonly reported disease in the nation’s blood supply) or can be passed from mother to child during pregnancy or birth.  No vaccine is available to protect people against babesiosis, so personal protection including use of an EPA-registered repellent on exposed skin and insecticide such as permethrin on clothing, is important.  Treatments are available. If untreated, babesiosis can be life-threatening.

Most people become infected with babesiosis when being bitten by immature blacklegged ticks, called nymphs (see graphic below), which are most active in the spring and early summer. Nymphs are about the size of a poppy seed.

They are difficult to see.  People are often unaware they have been bitten. Adult blacklegged ticks also can carry and transmit babesiosis.  The adult ticks are more active in cooler months.  Because the adults are larger, they are more likely to be found and removed before the illness is transmitted.  Experts suggest that the blacklegged tick must be attached to a person’s skin for more than 36 to 48 hours before babesiosis is transmitted.

Where Babesiosis Is Found

Human babesiosis was once found only in restricted coastal sites on the east coast, but experts note there has been an expansion in range. 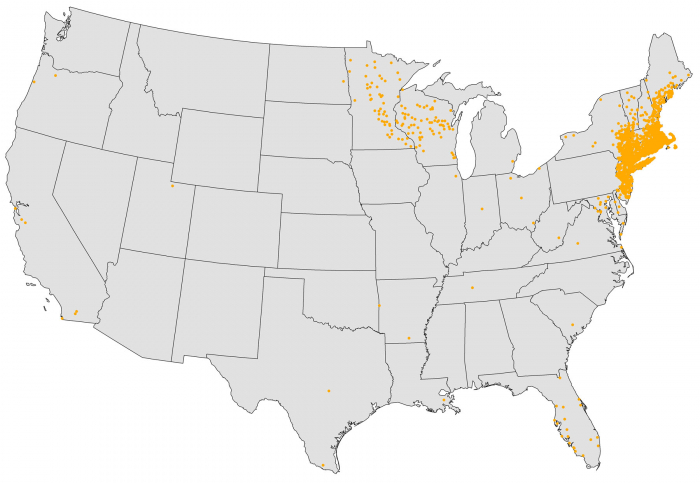 •  Between 2011 and 2015 there were 7,612 cases of babesiosis reported in 27 U.S. states
•  Nearly 95% of reported cases occurred among residents of seven states:  Connecticut, Massachusetts, Minnesota, New Jersey, New York, Rhode Island, and Wisconsin
•  Sporadic cases of infection have been reported in other U.S. regions, including the West Coast where they are caused by bites from the western black-legged tick

In a study done in national parks in the northeast in 2015 up to 15% of the ticks in Fire Island National Park near New York City carried babesiosis.  A study in Wisconsin found that 6.5% of the blacklegged ticks were infected with it.

Most people with babesiosis do not experience any symptoms.  Those who become infected and do have symptoms are affected in the summer months, typically June–August.

Symptoms usually develop within several weeks after being bitten by a blacklegged tick, but may occur months after the bite. While some tick-borne diseases affect individuals across the entire spectrum of ages, with babesiosis older individuals tend to have more serious disease.

Symptoms can be nonspecific and flu-like, such as:

Who is Most at Risk

Babesiosis can be a severe, life-threatening disease, particularly in people who

•  Do not have a spleen (surgically removed)
•  Have a weak immune system for other reasons, such as cancer, or treatment with drugs that lower immunity
•  Are HIV-positive
•  Have other serious health conditions (such as liver or kidney disease)
•  Are elderly

To determine whether children are infected with babesiosis as often as adults, a study was carried out on Block Island, RI, where babesiosis is regularly found.  Several children and adults tested positive for Lyme disease, and 17% of children and 14% of adults with blood evidence of Lyme disease also had blood evidence of babesiosis.  The investigators concluded that children are infected with babesiosis at the same rate as adults and noted that this infection is underdiagnosed in all age groups .