Where You're Likely to Find Ticks

Ticks can’t fly or jump. They do not drop from trees.  They cling to tips of grasses and shrubs. When a person, pet, or other animal brushes the vegetation where a tick is waiting, it quickly climbs aboard. 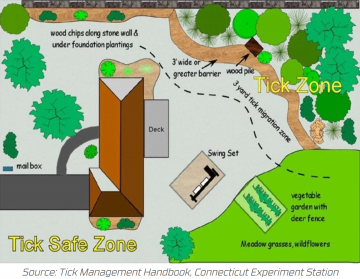 Ticks are found worldwide. To see where they are in the U.S., click here.

Create borders of wood chips, stone or any other landscaping material to serve as a barrier between tick-safe and tick-danger zones. 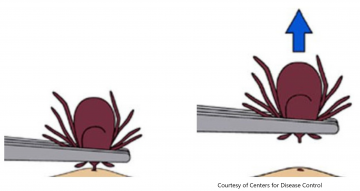 If you find an attached tick, use tweezers to grasp it as close to the skin as possible. Pull upward with steady, even pressure. Don’t twist or jerk the tick.

Avoid folklore remedies (“painting” the tick with nail polish or petroleum jelly, or dishwashing detergent or touching the tick with a hot match) to make it detach. The tick is cemented in place and cannot release until she has taken a full blood meal no matter what you do to irritate her.

There is a school of thought that suggests that the tick, when irritated, may regurgitate stomach contents into the wound, which could potentially increase the chances of disease transmission.

Click here to find out what else to do if a tick bites you.

Tick-Borne Diseases You Need to Know About

Consumer Reports The Great American Tick Invasion May 30, 2019 An exploding tick population is spreading a host of diseases. Disease-carrying ticks, found in all 50 states, have significantly increased their geographical range in the past 15 years, showing up in new places nearly every year and multiplying quickly. https://www.consumerreports.org/outdoor-safety/the-great-american-tick-invasion/

Hook, S. A. et al. Ticks and Tick-Borne Diseases U.S. public’s experience with ticks and tick-borne diseases: Results from national HealthStyles surveys Apr 15, 2015 63.7% of respondents reported Lyme disease (LD) occurs in the area where they live, including 49.4% of respondents from the West South Central and 51.1% from the Mountain regions where LD does not occur. Conversely, in the New England and Mid-Atlantic regions where LD, anaplasmosis, and babesiosis are common, 13.9% and 20.8% of respondents, respectively, reported either that no TBDs occur in their area or that they had not heard of any of these diseases. https://www.sciencedirect.com/science/article/abs/pii/S1877959X15000540

Occi, J. L. et al. Journal of Medical Entomology Annotated List of the Hard Ticks (Acari: Ixodida: Ixodidae) of New Jersey Feb 8, 2019 …The verifiable hard tick fauna of New Jersey (NJ) currently comprises 11 species. Nine are indigenous to North America and two are invasive, including the recently identified Asian longhorned tick, Seven additional species may be present in the state or become established in the future but whose presence is not currently confirmed with NJ vouchers. https://academic.oup.com/jme/article-abstract/56/3/589/5310395