Mosquitoes that Carry It

When and Where They Bite

These mosquitoes bite people because they are available. Aedes actually prefer people and seek them out even when other mammals are available.

Where They Are Most Often Found

West Nile virus is found in all "lower" 48 states. 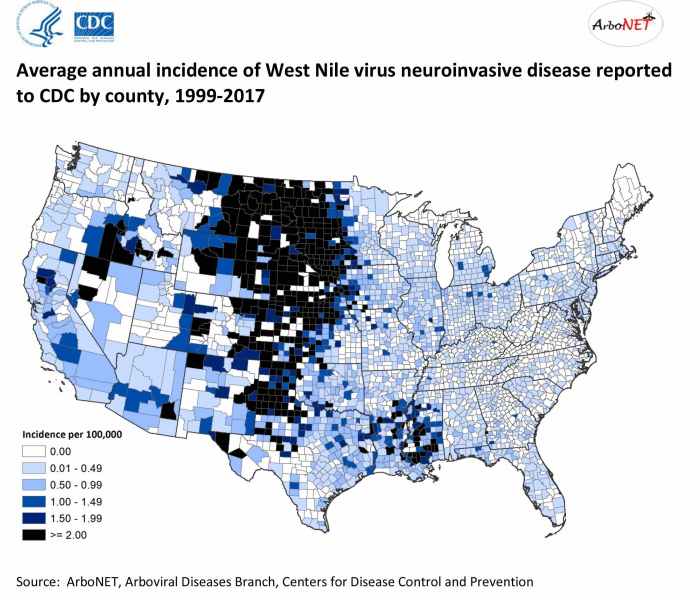 CDC Morbidity and Mortality Weekly Report West Nile Virus and Other Domestic Nationally Notifiable Arboviral Diseases - United States, 2018. Aug 9, 2019 West Nile virus (WNV) is the leading cause of domestically acquired arboviral disease in the US. Other arboviruses, including eastern equine encephalitis, Jamestown Canyon, La Crosse, Powassan, and St. Louis encephalitis viruses, cause sporadic cases of disease and occasional outbreaks. In 2018, there were 2,813 reported cases of domestic arboviral disease, of which 94% were WNV More than1,650 (63%) were classified as neuroinvasive disease (e.g., meningitis, encephalitis, and acute flaccid paralysis), for a national incidence of 0.51 cases of WNV neuroinvasive disease per 100,000 population. …Arboviral diseases continue to cause serious illness and have no definitive treatment…. https://www.cdc.gov/mmwr/volumes/68/wr/mm6831a1.htm?s_cid=mm6831a1_w

Centers for Disease Control and Prevention (CDC) Jan 8, 2019 WNV is now well established in the lower 48 states of the US.  Vector mosquitoes are relatively abundant. Human cases can be expected every year. Avoidance of mosquito bites is the only practical preventive measure available. [This site has a map showing WNV human cases from 2003 to 2018.] https://www.cdc.gov/westnile/statsmaps/preliminarymapsdata2018/disease-cases-state-2018.html