La Crosse (LACV) virus is the nation’s second-most prevalent mosquito-borne virus. It is spread to people by the bite of an infected mosquito. The disease gets its name from La Crosse County, Wisconsin, where the illness was first observed by physicians in the 1960s.

LACV is a relatively uncommon disease, with most cases occurring during the summer. But, it can occur anytime during mosquito season, which typically runs from May through October in more northern areas. In the United States, 50-150 La Crosse encephalitis virus neuroinvasive disease cases are reported each year.

Which Mosquito Is the Primary Vector?

La Crosse virus is carried and transmitted primarily by the eastern tree-hole mosquito, Aedes triseriatus, a native species found throughout most of the Eastern U.S.

Who is Most at Risk?

La Crosse virus is principally a disease of children, who account for up to 75% of cases. But, both children and adults can be infected with LACV. It strikes boys aged 5-9 in particular. Those with severe illness usually require hospitalization, supportive care, and/or rehabilitation. Between 5% and 15% of all recovered patients develop recurring seizures.

Where La Crosse Encephalitis Is Found

Most cases occur in the upper Midwestern, mid-Atlantic, and southeastern states. Almost 86% of all cases between 2018 and 2021 occurred in the states of Ohio, North Carolina, West Virginia and Tennessee. Ohio has reported more human cases than any other state in the U.S., averaging about 20 cases per year. 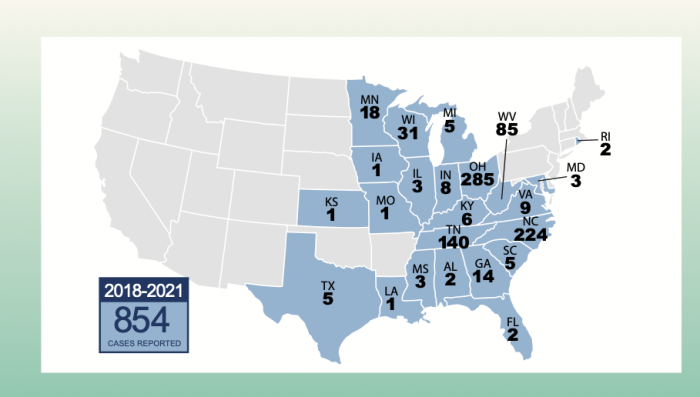 La Crosse virus is easy to misdiagnose, in part because its symptoms can be easily confused with those of other illnesses, such as the flu. Symptoms usually occur suddenly within 1-2 weeks after having been bitten by an infected mosquito.

Mild signs and symptoms include:

Lasting symptoms of the virus, including seizures, paralysis, and cognitive abnormalities, have been reported in some cases. In rare instances, long-term disability or death can result from La Crosse Encephalitis. Severe disease occurs most often in children under 16 years of age.

Severe signs and symptoms include:

Mosquitoes capable of infecting humans with LACV are typically active during the day, but it’s important to protect against mosquito bites whenever you are outdoors. Use repellents containing DEET (or other EPA-registered active ingredients) according to label directions. The American Academy of Pediatrics and the Centers for Disease Control and Prevention note that products containing up to 30% DEET are appropriate for children over two months of age, following label directions for proper application. For more information, please visit the prevention page.