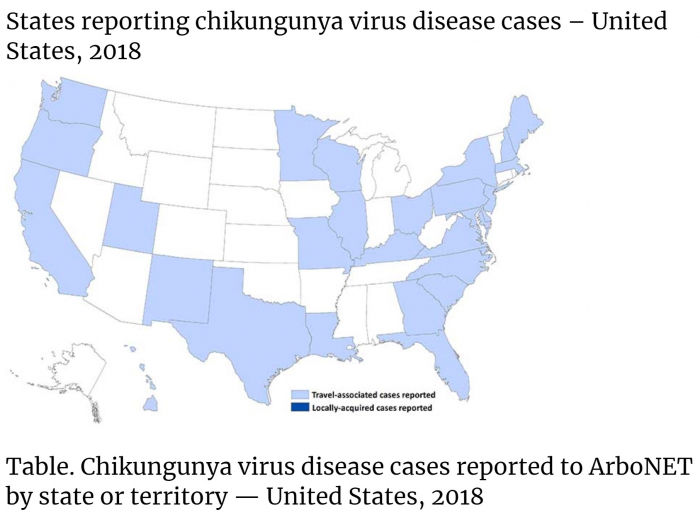 World Health Organization Chikungunya Apr 12, 2017 Chikungunya is a viral disease transmitted to humans by infected mosquitoes. It causes fever and severe joint pain. Other symptoms include muscle pain, headache, nausea, fatigue and rash. Joint pain is often debilitating and can vary in duration. The disease shares some clinical signs with dengue and Zika, and can be misdiagnosed in areas where they are common. There is no cure for the disease. Treatment is focused on relieving the symptoms. https://www.who.int/news-room/fact-sheets/detail/chikungunya

Almeida Bentes, A. et al. Clinical Infectious Diseases Chikungunya Fever: An Epidemiological Review of a Re-Emerging Infectious Disease Sept 15, 2009 Chikungunya fever is an acute febrile illness associated with severe, often debilitating polyarthralgias. The disease is caused by Chikungunya virus (CHIKV), an arthropod-borne virus that is transmitted to humans primarily via the bite of an infected mosquito. Since a re-emergence of CHIKV in 2004, the virus has spread into novel locations, such as Europe, and has led to millions of cases of disease throughout countries in and around the Indian Ocean. The risk of importation of CHIKV into new areas is ever present because of the high attack rates associated with the recurring epidemics, the high levels of viremia in infected humans, and the worldwide distribution of the vectors responsible for transmitting CHIKV. . https://academic.oup.com/cid/article/49/6/942/335046